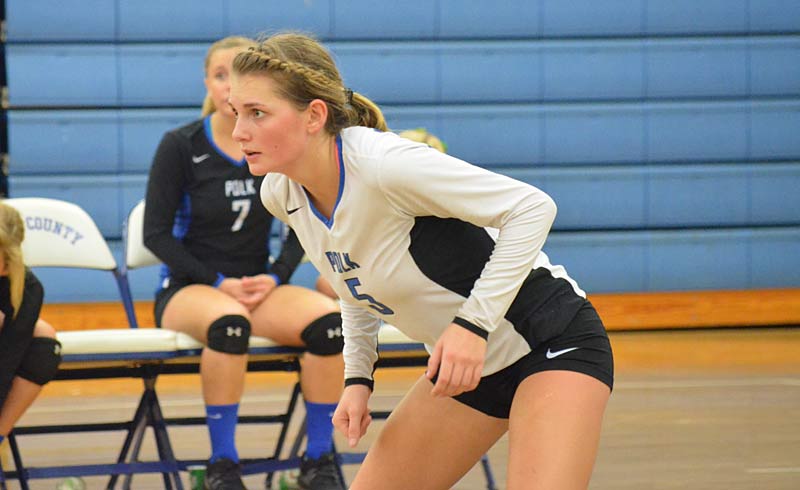 A three-game sweep, a key conference win and a little bit of vengeance. All in all, a pretty good night for Polk County’s volleyball squad.

The Wolverines avenged Thursday night a loss earlier this season to Mountain Heritage, rolling past the Cougars 25-17, 25-21, 25-22 in a Western Highlands Conference match at Polk.

With the win, the Wolverines improved to 8-5 overall, 8-2 in conference play. Given that loss to Mountain Heritage earlier this season, Polk head coach Kelly Risley said the Wolverines couldn’t afford a similar fate on Thursday as Polk looks to gain a 2A playoff berth.

“The split in the conference, that’s huge for us,” Risley said. “We wanted to win in three games, so this is fantastic. After we lost to them in five games up there, we had a goal tonight of getting out of here in three games, so it was great to come out and be able to do that.”

Junior Sarah Phipps had 15 kills, served 15 points and had three blocks for Polk, which also got 27 assists and four blocks from Kara Overholt. Kayla McEntire served 16 points and Baileigh Fisher served 14 for the Wolverines.

“One thing we haven’t been doing well this season is that once we get down, being able to come back. So it was good to see us come back in that third game (in which Polk trailed 11-6 early).”

Polk County will play twice on Saturday in the Pink Tournament at Rosman before traveling Tuesday to Mitchell in another WHC match.