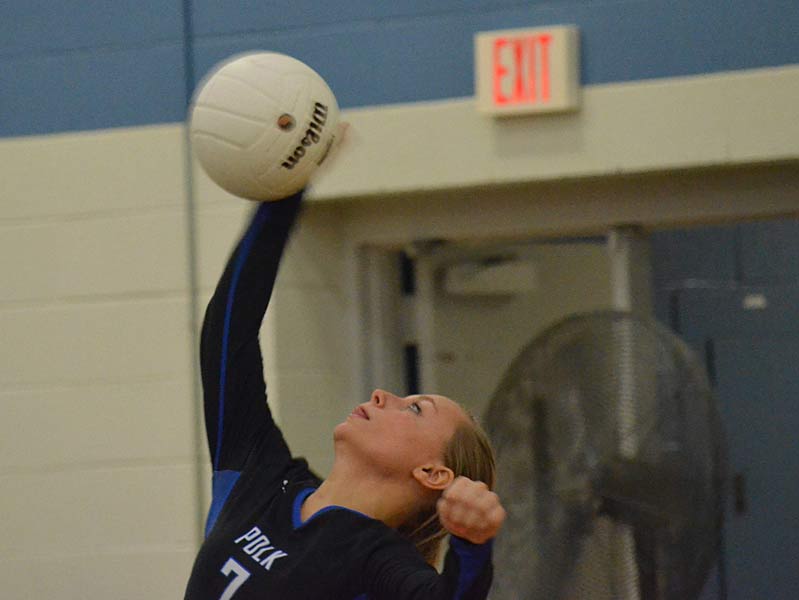 Kelly Risley took over the Polk County volleyball program in early August, getting a late start on the 2013 season. She had to spend her first days as a teacher at Polk taking bus training. A challenging early-season schedule has kept Risley and the Wolverines constantly on the go.

And yet Risley wouldn’t have it any other way.

“I couldn’t be happier,” said said. “I am a firm believer that things happen for a reason and being here as a teacher and a coach I am reassured daily that I made a great decision.”

At 7-5 overall, 7-2 in the WHC race with the win over Madison, Polk trails Hendersonville by two games in the league race. Remaining in the hunt for a WHC playoff berth, perhaps even a league title, will require an aggressive approach to the final half, Risley said.

“As we start into the second half of the season, we need to focus on putting teams away. That means terminating the ball every chance we get,” Risley said.

“I feel as if this team has a great core group of players. The girls work together as a team and that is a great strength. I couldn’t be happier with the growth of each individual on this team. They have worked hard to improve individually and as a team.”

A native of Sarasota, Fla., where she began her coaching career, Risley came to Polk after coaching at Rugby Middle School and with the Xcel Volleyball program in Hendersonville, where she has guided several teams to top 10 national finishes. She inherited a Wolverine squad that returned several players from last year’s Western Regional finalist, including junior setter Kara Overholt, the co-conference player of the year last season. Overholt has helped guide an offense this season led by hitters such as Sarah Phipps, Rebecca Mitchell and Baileigh Fisher as well as freshman Lily Owens. Savannah Ross, Ashley Love and Caroline Lee have also played key minutes for the squad.

“I believe that I have had many good surprises,” Risley said. “The first and most memorable would be how genuinely nice and caring these girls are to me, their teammates and others. I feel blessed to be involved with such a wonderful group of young ladies.”

While catching Hendersonville in the league race will prove a tall order, a playoff berth is definitely there for the taking for the Wolverines. Thursday’s matchup with Mountain Heritage will be instrumental in Polk’s postseason quest.

“In order for us to earn a playoff berth, we will need to first take care of Mountain Heritage on Thursday night,” Risley said. “From there we need to play to win in every match.”