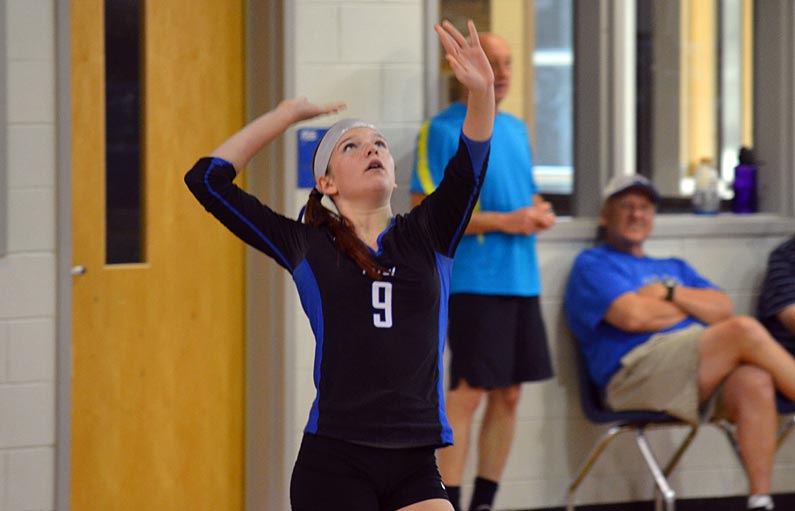 A perfect season? Still possible, admits head coach Brandy Alm. But what the Wolverines really covet is a Blue Ridge Middle School Conference championship. And they’re moving ever closer to that goal.

With the win, watched by the members of the Polk County High School volleyball squad, the Wolverines improved to 9-0, 7-0 in division play.

Polk jumped out to a 5-0 lead in the first game behind the serving of Lauren Ketwitz. The Wolverines kept building the lead, then took command with a 7-0 run to take a 23-10 lead. Cameron Capozzi had a huge kill in that run and Ketwitz delivered a pair of service winners.

The Wolverines then took command early of the second game as well, with Capozzi, Reagan Waddell, Sara McCown, Maddie Blackwell and Kendall Hall each playing key roles. Rugby got as close as 12-9 before Polk began slowly pulling away, scoring six of the next nine points for a 19-12 lead, then scoring the final three points of the match to secure the victory.

The Wolverines served effectively throughout the match and dominated play at the net.

“Defensively, we’ve improved so much moving our feet, and we’re really aggressive at the net,” Alm said. “In middle school, that’s difficult to do, but they do it.

“They make good passes, and that’s what it’s all about. It puts them in good position and makes it easier to set.”

Polk has two of its final three games at home before entering the Blue Ridge postseason tournament. It is there where the conference champion will be crowned, and while Polk could enter that event with a spotless record, it’s not foremost in the minds.

“I think we have the capability to do it, but we don’t really talk about that,” Alm said. “What we talk about is winning the conference. That’s what we want.”