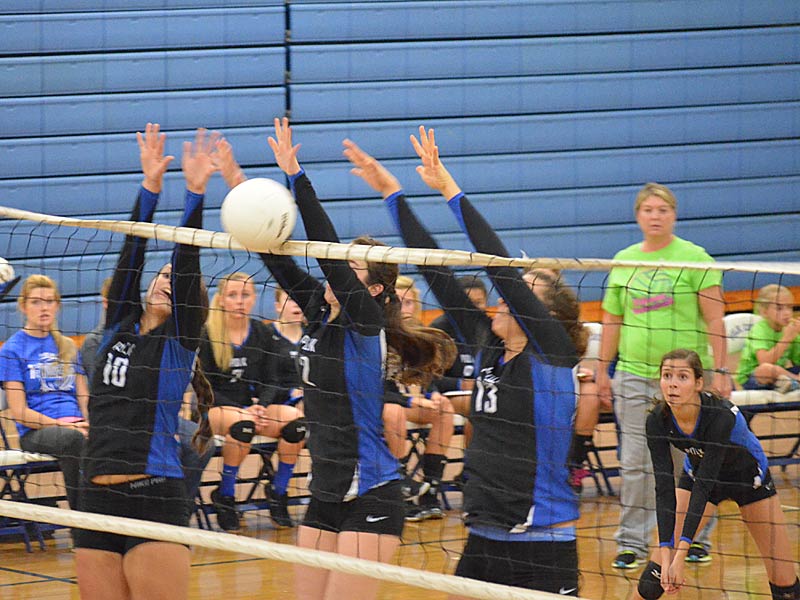 A point here, a point there and Thursday’s Western Highlands Conference volleyball showdown with Hendersonville might have had a much better ending for Polk County.

Instead, the Wolverines were left to rue narrowly missing a shot at grabbing a share of the WHC lead as the defending 1A state champion Bearcats eked out a 25-20, 25-23, 25-19 win at Polk County. The loss dropped the Wolverines to 6-2 in conference play while Hendersonville kept its league mark perfect.

Yet the setback didn’t leave Polk head coach Kelly Risley as concerned about the conference implications as it did frustrated by on-court miscues. In each of the three games, Polk had a chance to seize momentum, but saw those chances slip away on every occasion.

“I saw a lot of good things tonight,” Risley said. “We hung in there with them. There were a couple of big points that we needed to go our way that didn’t. It seems like those points went their way every time when they needed it.

The two teams swapped points and leads throughout the night, with a seven-point margin the largest gap either team opened in any of the three games. The two teams were deadlocked at 19 in the opening game before Hendersonville reeled off six of the final seven points to claim the set. The pattern repeated itself in the second game, though Hendersonville led much of the way, taking a 15-11 edge. The Wolverines then rallied, and took a 17-16 lead on a Kara Overholt kill.

The Bearcats led virtually the entire way in the final game, opening an 8-5 lead and keeping the margin three points or larger the rest of the game. Polk did fight off two match points before Hendersonville closed things out.

“We really struggled at the service line tonight,” Risley said. “We’ve got to serve better.”

Overholt had 32 assists and five blocks for Polk, who also got 12 kills from Sarah Phipps and eight kills and six blocks from Rebecca Mitchell. Savannah Ross had 13 digs, with Lilly Owens adding nine digs. Ashley Love and Baleigh Fisher each accounted for 12 points while serving to lead Polk.

Now 6-5, 6-2, Polk is back in action Tuesday at Madison before Mountain Heritage visits on Thursday for a key conference showdown.