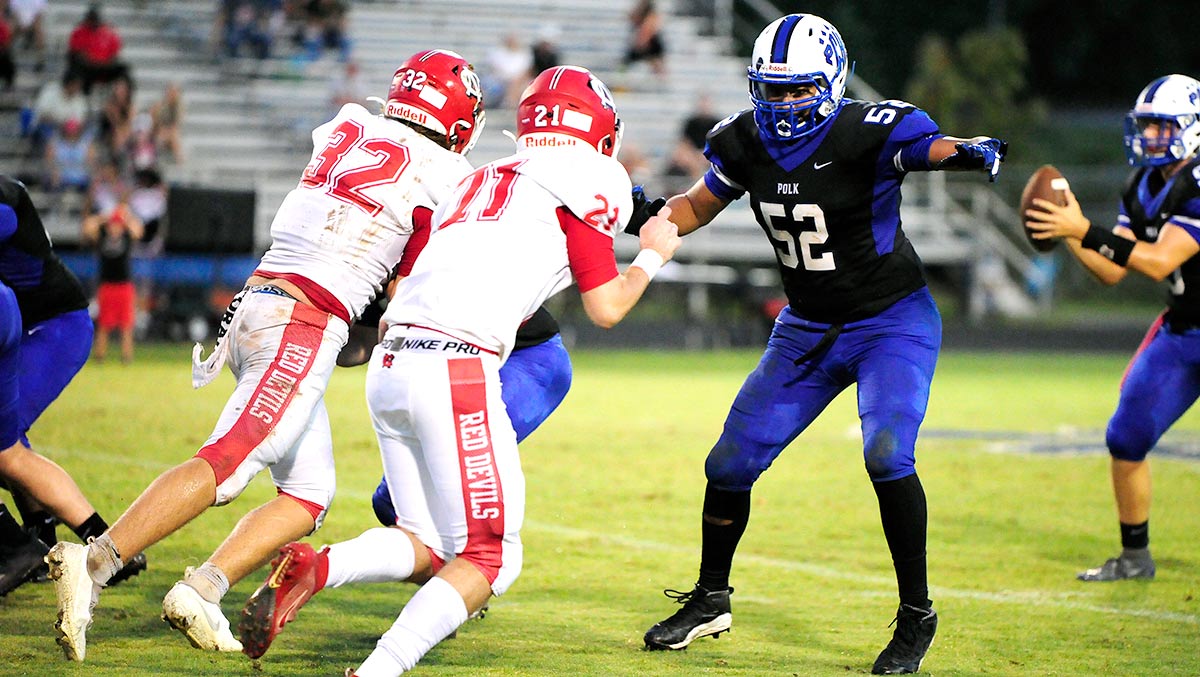 As grateful as Ollis was for the gesture, that charity likely won’t be remembered for most of Friday evening.

The Wolverines and Falcons are set to tangle in at 7:30 p.m. kickoff at West Henderson. The game is scheduled to be aired on the NFHS Network, and it marks the first time the two programs have faced off since the 1996 season.

Both teams will enter looking to rebound from losses. West Henderson (0-2) dropped a 58-0 decision to Hendersonville last week while Polk County fell 44-0 to defending state champion Salisbury. The Wolverines, Ollis said, have done a good job putting that loss in perspective and moving on.

“Experience is the greatest teacher in the world,” Ollis said. “We saw a very good football team in Salisbury. For a quarter and half, we lined up and played toe to toe with them. But games last 48 minutes in high school football, so that doesn’t work.

“People have asked why we scheduled them. I wanted everyone to see what a state championship 2A team looks like. We want to evolve to be like that.”

Polk will this week see a West Henderson team that has struggled with injuries amid a rough start to the season. The most notable among those sidelined is junior quarterback Lukas Kachilo, whose presence played a role this season in West moving to a spread offense.

With Kachilo out, sophomore Truitt Manuel has moved to quarterback and has also been the Falcons’ leading rusher, averaging 101 yards per game on the ground as West has been largely even in its run-pass balance.

“He’s a long, tall drink of water,” Ollis said of Manuel. “He runs well, and they like to get him outside the pocket to throw. He’s the oil that makes their engine run smoothly.

“We’re going to see a team that’s very diverse. They’ve got a big, tall receiver (Lukas Corn) that they like to get the ball to. It’s also the first true 50 defense that we’ve seen this year.”

Polk County, as is the case with nearly every other school in the area, has faced having players placed in quarantine this week due to COVID-19 protocols, and the Wolverines likely won’t have a full roster for Friday’s game. That doesn’t lessen its importance as Polk continues to ramp up for its first season in the Mountain Foothills 7 Conference.

“We’ve got this game and one more game and then it’s time to play conference games,” Ollis said. “It would certainly be good to get our confidence back over those games.

“This is the first game on the road, and our kids like playing on fake grass (West Henderson has artificial turf). We’re looking forward to the challenge that this game will bring us.”