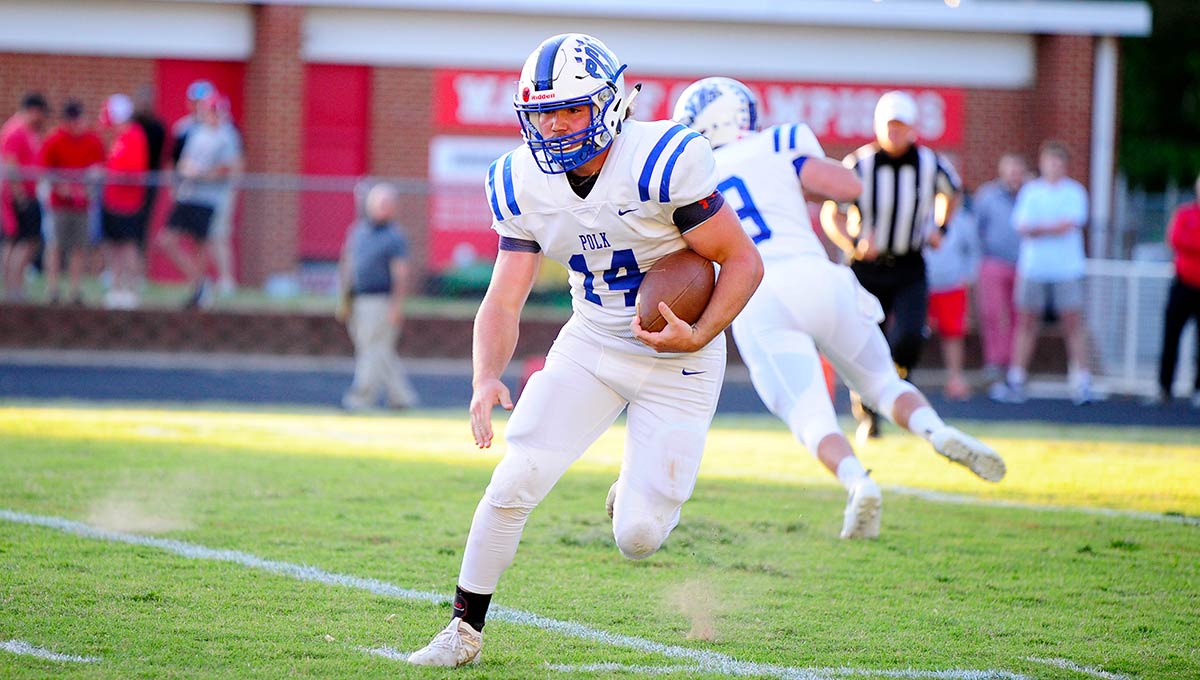 You are more than forgiven if it seems like just yesterday that Polk County battled East Surry in the 1A West Regional football final.

It’s been less than four months since the Wolverines trekked to Pilot Mountain and tossed a scare at the Cardinals before East pulled away in the second half and claimed a 41-7 victory.

A few things have changed since – Polk County is now in the 2A ranks (as is East Surry) and in a new conference – the Mountain Foothills 7, joining Brevard, Chase, East Rutherford, Hendersonville, Patton and R-S Central in what should be an extremely competitive league. The Wolverines have added new faces to the schedule, including Newton-Conover, which rolls into G.M. Tennant Stadium on Friday for the 2021 season opener.

But what hasn’t changed are many of the faces on Polk County’s roster. The Wolverines return a number of players, especially at the skill positions, from the West Regional runners-up, and that group forms the basis of a roster more than ready to pick up where it left off in late April.

“There’s a carryover of confidence,” said Polk County head coach Bruce Ollis, who begins his 17th season leading the Wolverine program. “Certainly when you had so many young players that played crucial roles for us, being part of that team that made it to the Western Regional final, they feel like that that’s certainly not too far off the horizon to get one game further.

“So that’s the first thing that that jumps out to me. I wouldn’t call it swagger. I’d just call it convinced.”

Experience certainly breeds confidence, and unlike a season ago, the Wolverines are blessed with that.

It begins in the backfield, where junior quarterback Casey Beiler (61-of-113, 894 yards, 11 TDs) returns along with another junior, leading rusher Angus Weaver (1,017 yards, 15 TDs). Weaver will be joined by juniors Vincent Twitty and Mackus Simpson and freshman Karlen McEntyre to give Polk a backfield with size and speed.

“Casey’s got a year under his belt and played pretty well,” Ollis said. “We still think we’ve got one of the better rushers around in Angus. Mackus Simpson can surprise you. He may not be as big or fast, but he’s slippery. He makes people miss.

“Then you throw Vince Twitty in there and and Karlen McEntyre, a freshman who will be a varsity player, and we’ve got four quality runners.”

Twitty could also see some time at receiver, but the Wolverines have ample talent and experience there in the returning trio of sophomores Antonio Simpson and Keaundrae Green and senior Steven Chupp. Junior Nathan Rhein, who moved into the area in the offseason, will also see time at receiver. Senior Jacob Knighton and sophomore Bryson Jones will likely see time at tight end.

“We have some great players on the edge,” Ollis said. “Three very dynamic guys that can catch the ball. People aren’t going to just be able to load the box on us. There’s going to be games when we throw it about 25 times.”

The Wolverines hope to provide open field to catch and run for those players with an offensive line returning three starters in junior Obed Najera and seniors Kanye Staley and Harrison Waddell, fresh off winning the state 1A title in the shot put. They’ll be joined by a group that includes juniors Bryson Owen, Colton Bradley and Gabe McGraw and sophomores Kole Powell and Connor Cantwell.

Offensive line coach and co-coordinator Zach Searcy left in the offseason to join Asheville High’s program. Taking over line duties is Dave Minnich, who Ollis said has already made an impact despite not joining the program until the first week of practice.

“Dave Minnich has come in and done a tremendous job in getting those guys to continue to be motivated,” Ollis said. “He’s had some good ideas and he’s a worker. I’ve really enjoyed being around him.”

The experience and talent give Ollis a number of options for game planning, though nearly all of those plans include a heavy dose of Weaver.

“We could be ground-based, we could be five wides,” Ollis said. “So that’s kind of a two-headed monster, to a certain degree. People want to load the box on us, they have to worry about our play action passing game, too. Even when we’re in a running-type set, we can still throw the football.

“I’m a little prejudiced when I say this, but if Angus Weaver is not the best between-the-tackles runner in Western North Carolina, I want to see the guy who is. He can run downhill with that forward body lean as well as any any player I’ve ever coached. He enjoys running between the tackles. He knows that’s where his game is and doesn’t try to worry about outrunning people on the edge. But if he has to stick his foot in the ground and get upfield outside, he’s also effective at that.”

Defensively, Weaver and Mackus Simpson will start at linebacker, with Staley, Najera, Waddell and Kendall McEntyre expected to see significant time upfront. McEntyre will wear number 34 this season and could occasionally slip into the backfield on offense. Tim Simmons will help supply depth at linebacker along with Knighton.

“(Nodine) has probably been the most overall committed player we’ve had for all the things that he’s done to our help with our program,” Ollis said. “He’s helpied me recruit JV, football players, he’s picked up kids and brought them to practice when they don’t have a ride. He’s out there selling discount cards as well as anybody.

“Things that sometimes don’t show up on paper, and his effort is incredible. He’s put a little weight on, he’s awfully strong in the weight room and he’ll give us some quality snaps (in the backfield) and at strong safety. He’ll be on all the special teams helping us out and and providing a lot of leadership.”

“We’ve got two good kickers,” Ollis said. “The competition has really been good, and I’m good with either of them kicking the football. Isaac could also punt pretty well. He was involved in our football program two years ago as a freshman and kicked for the JV, and Logan kicked for the JV a year ago. So they both have game experience.”

It all adds up to what promises to be a most interesting season. The Wolverines will be challenged in the first four weeks with a non-conference schedule that includes Newton-Conover, Salisbury, West Henderson and Asheville. “If it’s not one of the better non-conference schedules in the state, then I want to see the one it is,” Ollis said.

Polk will then move into conference play, and most have picked the Wolverines as a contender for a conference title

Ollis thinks the roster is ready for that 10-week grind.

“There’s more leadership and it’s kind of group leadership, rather than just one single man,” he said of his squad. “Our players are more focused and the work ethic has been awfully good.

“I think there’s going to be some really good teams in the league,” Ollis said. “I’m not so sure that R-S Central is not the dark horse to be awfully good. We all know Hendersonville is good. We feel like we’re going to be pretty decent. Chris Cogdill at Chase has got them rolling. I know that Craig Pritchett at Brevard has got a bunch of kids out and he’s kind of brought Brevard football back to prominence to a certain degree. So it’s going to be a very, very competitive conference.”