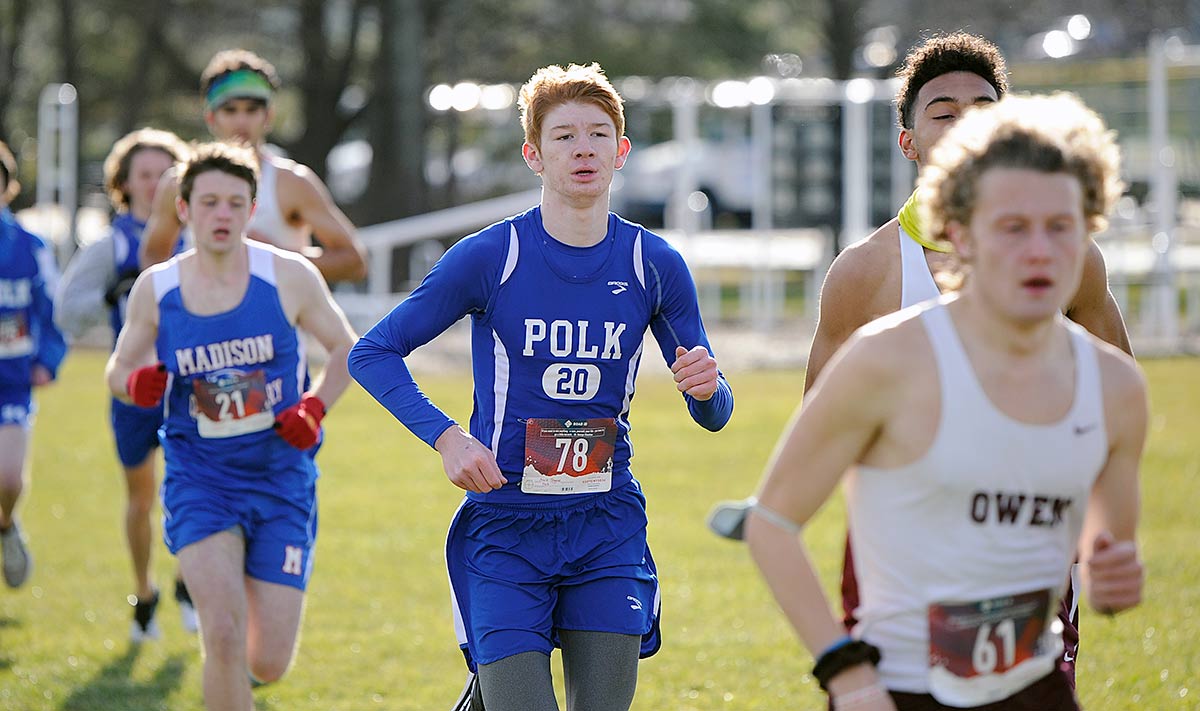 HENDERSONVILLE – In a normal year, Polk County’s indoor track team would typically be hosting meets in January, most usually bearing the label of Polar Bear.

A cold and windy Jackson Park played host to the WHC meet, with Polk County runners battling through the conditions to earn second place in both the boys and girls races. Wolverine junior Olivia Overholt claimed second in the girls competition and eight Polk County runners earned all-conference recognition by virtue of their finish.

It was a good effort for Polk County on a morning in which no one viewing the races seemed to mind wearing a mask.

“It’s tough to run when the wind stands you up as you’re going through,” said Polk County head coach Alan Peoples. “The other thing is that 55 degrees is wonderful weather to run as the body doesn’t have to work as hard. When the temperature is in the high 30s or low 40s, the body has to work extra hard to keep you warm. That’s energy that could have been used for running.”

The cold – 34 degrees at the start of the boys race – didn’t seem to bother the Wolverines that much anyway. The Polk boys claimed five of the top 11 spots in the race, led by Mark Teague, who raced with the lead pack of runners for most of the course and finished fifth. A wave of Wolverines soon followed as Braxton Edwards, Chan Barber, Chris Rickman and Tristan Devine crossed the line in eighth, ninth, 10th and 11th, respectively. All earned All-WHC honors.

In the subsequent girls race, Overholt and Owen’s Hannah Larios broke away from the field early. Larios began to pull ahead as the race wound through the wooded area of Jackson Park and eventually emerged for the final time with a lead of almost a minute, preserving that as she raced to the finish line ahead of Overholt. Polk County’s Taytem Johnson followed in fifth, with teammate Emma Brunell placing 11th as those three also earned all-conference recognition.

“Over the course of the season, we lost some runners who dropped out and we had some who opted out before the season due to concerns about COVID,” Peoples said. “Those who were still here stepped up, and to get second place for both of our teams, they earned it.

Polk County teams earned an opportunity to compete in the 1A West Regional, which is set for Jan. 16 in Bryson City.

Polk County's Braxton Edwards earned a trip to the state cross country championships with his performance Saturday at the 1A West Regional in Bryson...