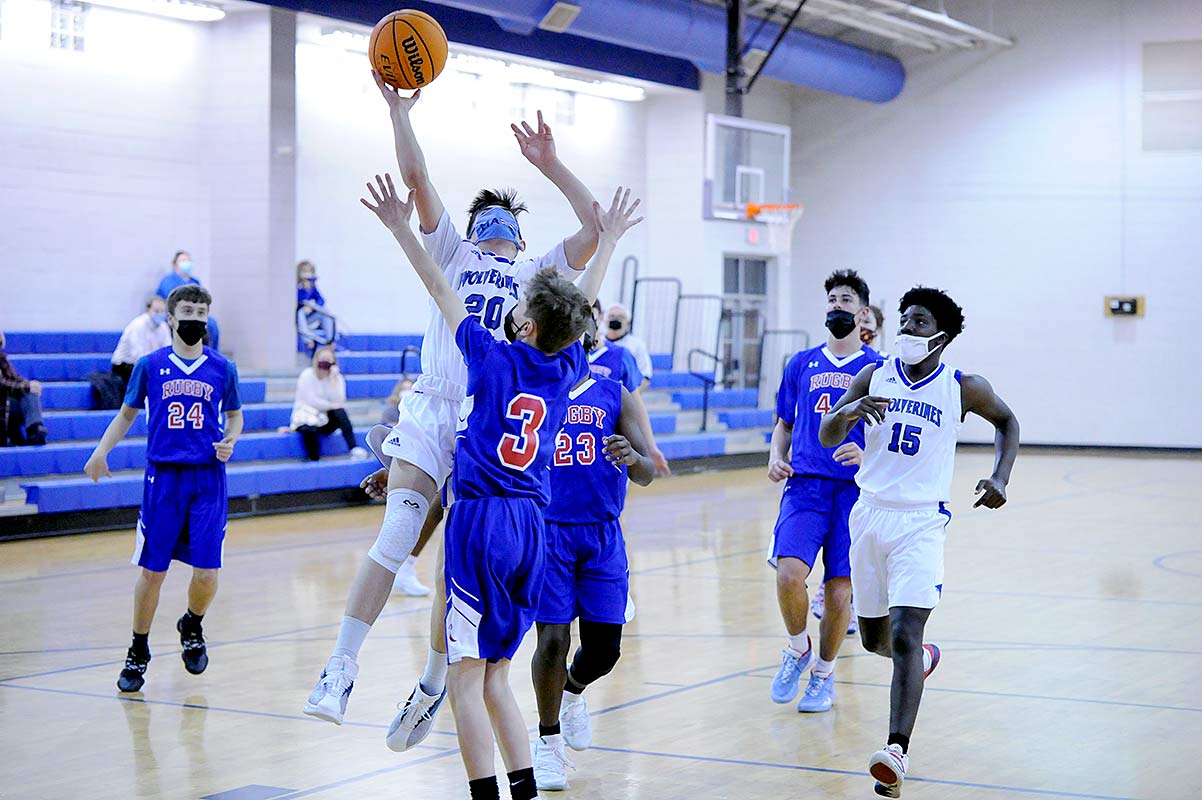 The final, chaotic three minutes of the Wolverines’ 47-38 loss to Rugby Middle, though, left a bit of fire in both Money’s eyes and voice as his postgame words surged through his mask.

“The heart we showed the last three or four minutes, I will take that all day over a win,” Money said. “I’m proud of them and proud of the heart they showed.”

Polk Middle trailed by 18 points at one point in the final quarter. With three minutes left in the Blue Ridge Conference battle, the Wolverines (1-4) still trailed the Raiders (3-2) by 15 points.

And then that heart came to the forefront.

Slowly Polk began to fight back, cutting the margin to single digits, 43-34, with 1:09 left on a Gunnar Alm layup off an inbounds play. Eno Baker followed with a steal and layup. Avery Hensley also forced a turnover and hit a layup, and with 26 seconds left, Polk Middle had pulled within 43-38.

The rally, though, ran out of steam at that point. Rugby hit 4-of-5 free throws in the final 10 seconds to seal a win that seemed already locked up minutes earlier.

Passion mingled with what-ifs after the game for Money. Unable to match Rugby’s height, the Wolverines had to work for open shots from the perimeter with the occasional penetration into the lane to often create an open layup. Many of those clear looks rimmed in and out.

“I don’t know how many open shots we missed,” Money said. “If some of those fall, who knows.”

Rugby scored the game’s first six points, but Banks Barber drilled a 3-pointer to stop the Raiders’ run, and Karlen McEntyre scored two late baskets to make it a 12-7 lead at the end of the first period.

Rugby pushed the lead to nine twice in the second period, its height leading to a huge advantage on the boards, but Polk again got two baskets in the final minute, these from Alm and McEntyre, for a 19-13 halftime gap.

The Wolverines pulled within four midway through the third quarter, but the Raiders responded with a 10-2 run to grab a 34-22 advantage entering the fourth quarter.

Rugby then continued to pull away until the determined Wolverines nearly stormed back.

“That’s the biggest thing I’m going to take away from this game, the team had so much heart,” Money said.

Alm had 13 points and McEntyre had 10 for Polk Middle, with Hensley adding seven. Barber finished with three points, with Aaron Jackson and Baker each scoring two and Dillon Pruitt adding a point.

Polk Middle returns to the court on Thursday, traveling to Apple Valley to begin the second half of the regular season.